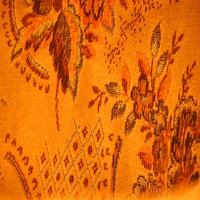 It's rumoured that Oscar Wilde said on his deathbed, ‘It's the wallpaper or me. One of us has to go.’

In approximately 4000 B.C., Egyptian papyrus, the earliest known form of ‘paper’, was introduced. Paper though, applied to a wall, actually began in ancient China. Firstly because the Chinese invented paper, and secondly because they glued rice paper onto their walls as early as 200 B.C. By 105 A.D. the hand painting of images and calligraphy upon paper derived from textile waste, resulted in the birth of wallpaper, as we know it today. However, there was none of the wonderful metal wall art, that you see today, in these ancient times.

During the 12th century, paper making had spread throughout Europe, via the development of paper making skills by Arabs in the Middle East. Jean Bourdichon painted 50 rolls of paper with angels on a blue background for Louis XI of France in 1481. King Louis ordered the portable wallpaper because he found it necessary to move frequently from castle to castle. Other well-heeled Europeans commissioned artists to paint paper for their walls, but real wallpaper can hardly be said to have existed till the advent of the printing press.

The earliest know fragment of European wallpaper that still exists today was found on the beams of the Lodge of Christ's College in Cambridge, England and dates from 1509. It is an Italian inspired woodcut pomegranate design printed on the back of a proclamation issued by Henry VIII. The paper is attributed to Hugo Goes, a printer in York.

The 1600s marked the debut of flock paper. Flock is the small shearing of wool left over from the manufacture of cloth. The Use of wallpaper became so widespread that it inspired the introduction of a tax in England in 1712 on paper that was "painted, printed or stained to serve as hangings”.

The repeal of wallpaper taxation in 1836 encouraged designers in England to produce very complex designs that became popular in the Victorian era. Charles Harold Potter in 1839 invented a four colour printing machine that could turn out 400 rolls of wallpaper a day. By 1850, eight-colour printing was available and in 1874, the twenty color-printing machine was invented. The wallpaper industry was booming. The prices were dropping and wallpaper became affordable to the masses.

In 1888, ready-to- use wallpaper paste was introduced making wallpaper easy to hang. Wallpapers suitable for nurseries appeared for the first time in the Victorian era. Front halls, lounges and dining rooms boasted bright colours that often included wallpaper. By the late 1800s, British designers like William Morris and Owen Jones flourished. Morris, for example, insisted on the purest colors and techniques and his influence is evident in the hundreds of mass-produced papers manufactured from the 1880s until the end of the century.

Due to war work, the manufacturing of wallpaper declined through the 40’s and 50’s. Most people went back to painting walls if they bothered at all. Unlike today, they did not have different mediums to choose from. At Brilliant Wall Art you do not need to paint walls when you can adorn them with art, including Resin Wall Art, Wooden Wall Art, Glass Wall Art, Rope Wall Art, Canvas Wall Art and of course the popular Metal Wall Art.

Back to my history of wallpaper. It wasn’t until the late 1960's and early 1970's that new "vinyl" wallpapers were introduced. Vinyl, an oil based product was cheap and easy to print. Typical vinyl wall coverings consist of an outer layer of vinyl laminated to a paper backing. Bright bold designs, easy to use adhesives and the reintroduction of flock paper, led to another boom in home decorating.

Wallpaper today is alive and kicking. Besides the traditional wallpapers we know and love, contemporary geometric patterns have become extremely popular. Digitally printed wallpapers now allow for large murals in varied patterns and colors. Most people however tend to paint their wallpaper, playing it safe with neutral tones and colours. Some rooms will have a feature wall, which is brighter, but you really need to visit Brilliant Wall Art to complement your room’s features and express your family’s personality.

Why don’t you transfer your personal artistic expression to the walls, in your home, by shopping online with Brilliant Wall Art, for Metal Wall Art? Do you love animals and the natural world? Do you prefer plants, flowers, trees and woodland? You will find a universal range of Metal Wall Art, ideal for your blank canvas.

Check out the metal wall art designs, we have a wonderful, bright, colourful and inspiring range of Abstract or Contemporary Wall Art. There are many different mediums to choose from,.

Brilliant Wall Art Price Promise offers all customers our Price Promise as we are confident that we will not be beaten on price. If you see the same product advertised at a lower price including delivery and in stock we will endeavour to match the price and where possible beat it.

Simply contact our team with details of the store or Website that you have seen the product(s) at a cheaper price and let us do the rest.